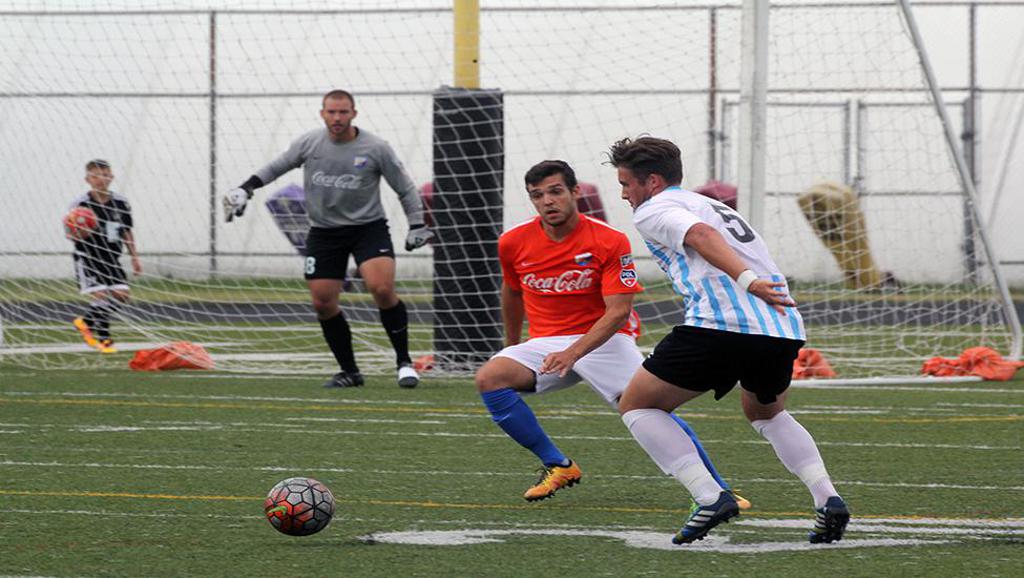 Waterloo, ON - Finishing up 14 matches of the regular season with their second win over the Dayton Dutch Lions, K-W United will move forward seated just below their Great Lakes rivals, the Michigan Bucks (12-2-0), as they enter the first round of playoffs on Friday.

This past Sunday's game against Dayton saw K-W find their strength in the second half of the match to land a 5-1 win over the Dutch Lions and their 11th win of the 2016 regular season.

The first half of the game saw chance after chance for K-W who were ferociously taking shots on Dayton's net. Unable to translate these opportunities into goals however, Dayton would be first on the board in the 25th minute to take an early lead of 1-0.

Closing in on the end of the first half, K-W's German hat trick master, Sven Konig, would sink his first of the game to tie things up 1-1.

And that was all K-W United needed.

The second half of the match saw aggressive efforts from both sides as they fought to break the tie. After several yellow cards were issued against Dayton, K-W's Konig was able to break through and land his second in the 63rd followed shortly thereafter by his third in the 69th. Taking the score to 3-1, Konig's three-goal game marked his 3rd hat trick of the season and landed him the title: "Man of the Match".

But K-W wasn't done quite yet! Midfielder Mohamed Aborig would add two more goals to the board and two more to his K-W resume in the 77th and 82nd. Finishing the game with a four point lead, several impressive saves by K-W's keeper, Jared Brown, and an undeniable strength that has developed over the past 14 games, K-W United will now set their sights on playoffs.

With their 2015 PDL Championship win not far back in their minds, K-W will travel to the Michigan Bucks' home field to kick-off the playoff matches. In an identical fashion to last year, K-W will once again face off against the Des Moines Menace (the Heartland division champions) in the PDL Central Conference Semifinals on July 22nd at 5:00pm.

The Michigan Bucks, will battle the Thunder Bay Chill at 7:30pm.

The outcomes of Friday night's games will determine which two teams move on to the PDL Central Conference Championships on Saturday July 23rd.