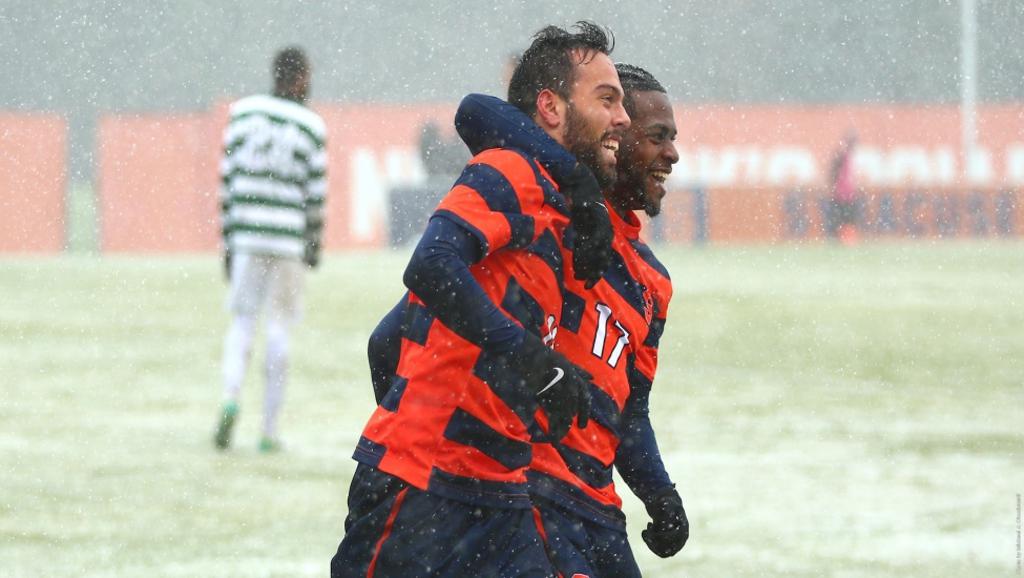 When the PDL season concludes, K-W United players head back to their respective colleges, universities or clubs, hoping to carry over their success from the summer into their fall seasons.

This autumn saw numerous United players make appearances at the NCAA tournament, one player help his team to a national bronze medal and a group of current and former K-W players claim a League 1 Ontario title.

K-W captain Sergio Camargo was a key contributor as the Syracuse Orange finished the regular season 12-4-4 and made the third round of the NCAA tournament. Camargo scored twice for the Orange in their second-round win over Dartmouth before the team would lose a tight 1-0 game to the North Carolina Tar Heels, ending their season. Camargo was offensive catalyst all year for Syracuse scoring four goals and adding three assists.

Midfielder Ken Krolicki also made the NCAA tournament with his Michigan State Spartans, however the squad fell in the first round in heartbreaking fashion. The No. 13-ranked Spartans played to a 1-1 draw with Southern Illinois University-Edwardsville and would eventually lose 9-8 in a marathon penalty shootout. Krolicki started every game for the Spartans, scoring three goals and adding four assists on the season.

Fresh off his PDL Young Player of the Year award, Sven Koenig returned to Hawaii Pacific University this fall, where he was the team leader in scoring in 2015. The German striker continued to show his scoring touch, tallying 21 goals for the HPU Sharks, not only leading his team, but leading the entire PacWest conference and being named to the All-PacWest team.

Austin Ricci garnered some individual accolades of his own this fall as the forward was named to the NSCAA NCAA Division I All-Great Lakes Region team for his season with Oakland University. Ricci tied for the conference lead in assists with five, while adding five goals as the Golden Grizzlies made the second round of the Horizon League Tournament where they lost to the No. 1 seed Wright State Raiders on penalties.

Another 2016 conference all-star with K-W ties was Florida Gulf Coasts Dylan Sacramento. Despite missing seven games due to injury, Sacramento, who last played for United in 2015, still finished third among FGCU players with 11 points, on his way to third-team All-Southeast Region honours.

Elsewhere in Florida, Uniteds Ishmael Longo and Donald Tomlinson were key members of a Florida International Panthers squad that made it to the Conference USA championship game. Both were consistent contributors in midfield all season with Longo tallying up five assists on the season and eventually being named an all-star at the Conference USA tournament.

The success of Longo and Tomlinson with FIU unfortunately came at the expense of one of their K-W teammates as their first-round win at the Conference USA tournament was over Mathieu Laurent and the University of Alabama-Birmingham. Laurent, a team captain in his third season with the Blazers, started every game and was a steadying force for the UAB back line all season.

Finally, Ben Whitcomb played his senior season at Fairfield University making 13 starts and scoring a goal as the Stags went 5-9-3.

North of the border, the fall of 2016 saw two members of K-W United make deep playoff runs with their respective universities.

Justin Springer started every game and scored four goals for the University of Guelph Gryphons, helping the team to their first OUA championship since 1990. The Gryphons upset the the three-time defending provincial champion York Lions in the final and eventually finished their season with a bronze medal at the national championship tournament. Springer, a team captain for the Gryphons, was named a second-team All-Canadian in his fifth and final season at Guelph.

Meanwhile, K-W head coach Martin Painter led the Western Mustangs womens soccer team to an OUA bronze medal the third provincial medal in the last four years for the team. Painter, who joined Western in 2011, guided the Mustangs to a 10-2-7 regular season, making the playoffs for the fifth-straight season.

Four players with ties to United helped the Vaughan Azzuri win the semi-professional League 1 Ontario this fall. Jarek Whiteman, Jashua Mills, Jarred Phillips and Stephen Piliotis helped Vaughan to a 17-1-4 season, finishing eight points up on second-pace Woodbridge and FC London. Whiteman, who played three seasons with K-W from 2013-15, led the Azzuri in scoring with 14 goals in 18 games, finishing fifth in the league, while Mills chipped in three markers, playing in 12 games after his PDL season with K-W finished.