Building the Foundation for On-Field Success 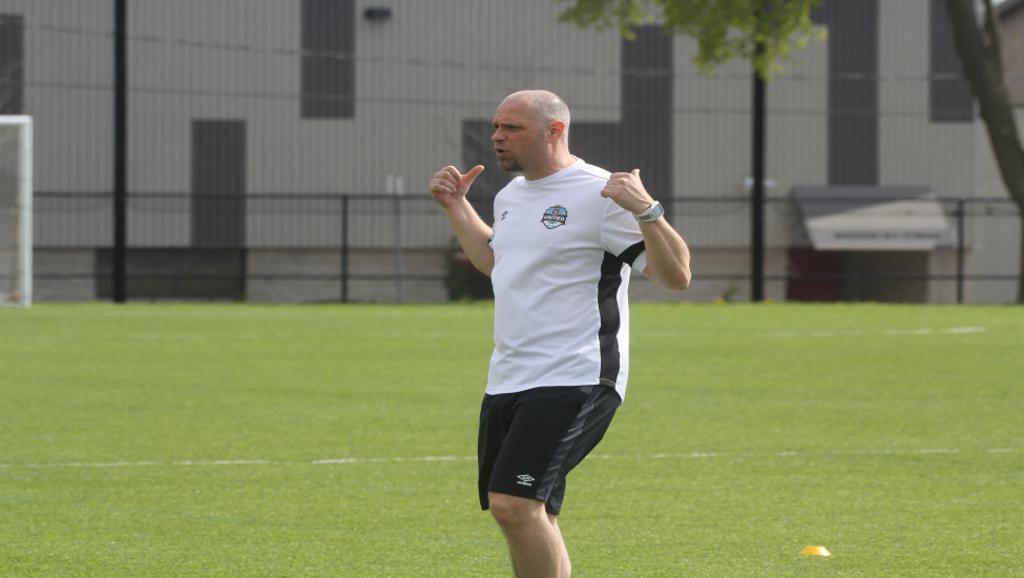 Fans get to see the spectacular goals, the incredible saves and the goal-saving tackles.

But behind every goal, save, tackle, pass and even every stride a soccer player takes on the pitch, are untold hours of work.

Thats where Derek Salvador comes in.

Salvador, K-W Uniteds strength and conditioning coach since 2015, works with K-W players every day during the season, helping each athlete be in the best physical shape possible to play.

In a way my job is to make a coachs life difficult, said Salvador. I dont want him to have any choices made by default because hes got a bunch of guys injured and he just has to pick the ones that are healthy.

I want to make his life difficult by giving him 25 healthy athletes who are ready to perform and then he has to decide who gets in the lineup.

Salvador started his business, Athletic Solutions Inc., when he saw a growing demand for strength and conditioning coaches who could go the team, rather than having the team come to a facility. Now with more than 15 years of experience in the field, Salvador brings his soccer-specific training to United, as well as youth and development teams in Toronto and Oakville.

During the season, Salvadors days with K-W United start early, with each player checking in and discussing their sleep quality and duration, nutrition, hydration and muscle soreness or fatigue. Tracking players needs is a huge part of strength and conditioning as Salvador stays on top of exactly where each player is in their fitness and designs programs based on what will best prepare them to play.

Once the players get on the field, Salvador leads a warm up, training session and cool down and then, depending on the day a weightlifting session.

Its a lot of behind-the-scenes work and there has to be a lot of communication, with the athletic therapists, the players and the coaching staff, said Salvador. You even have to look at the tactical set up of the team. If the coach wants to play a really high-tempo, high-pressure style, you have to train the players to be able to withstand that.

Salvador played soccer from a young age, playing in the Ontario Soccer League. When his playing days came to an end, he combined his interest in athletic therapy with his desire to stay involved in the game and started working in physiotherapy.

But while helping athletes rehabilitate injuries, he began to research what causes injuries and how they can be avoided. Thats how he wound up working in strength and conditioning and, having a soccer background himself, he saw an opportunity to build soccer-specific programs.

A lot of times, strength and conditioning coaches look at things only in terms of strength, speed, power and things like that, said Salvador. But I like to look at the sport first, what are the demands of the sport youre playing and how can we support that.

As important as it is to specify training to a particular sport, Salvador says there is often a temptation in soccer to do everything with a ball from a young age. However, in his work with young players, Salvador has found that working without a ball and focusing on fundamental movements even running is crucial in avoiding injury.

I spoke to a coach a few years ago who said to me in hockey, kids learn how to skate and they learn how to play the game, said Salvador. But when it comes to soccer, we just naturally assume people know how to run and we kind of ignore that and it just becomes all about the game.

Its like trying to build a pyramid, you have to start with a solid foundation. But if you flip the pyramid upside down and start adding things before youve given them good fundamentals, its going to tip over and thats how players start getting injured.